For People,
By People
|
SEO
|
by admin

SEO Experiments with the Mad Scientist

Have you ever played Thimblerig? Bet you have, but you just didn’t know what it was called. I didn’t know it’s name either – I looked it up on Wikipedia just now!

Thimblerig is also known as the shell game. Does that ring a bell? No, again, me either! It’s the game where there are three cups (or, back in antiquity, thimbles – hence the name) and a small object. The ‘operator’ places the small object – usually a small ball, or a pea – under one of the cups in plain view of one or more players. The operator then moves, or shuffles, the cups several times at speed. The players then have to guess which cup the object is under. You’ve played that before, right?

When played fairly, it’s a game requiring the skill to visually track the movement of multiple objects with their positions changing rapidly. Kind of like watching the shifting policy positions of electioneering politicians! It’s not always played fairly, though. Having lost a crisp €50 note to a short con in Antibes, I can attest to the role sleight of hand plays in gaming the ‘thimbles’ against the player.

So why do I mention it? SEO, that’s why.

SEO experts estimate that Google uses about 200 ranking factors. Their respective weights in contributing to ranking, and the nuances of how they process a website’s SEO signals, is something that we can never know for certain. And once we get too close to knowing, poof! They change.

SEO Experiments and the Clock Tower 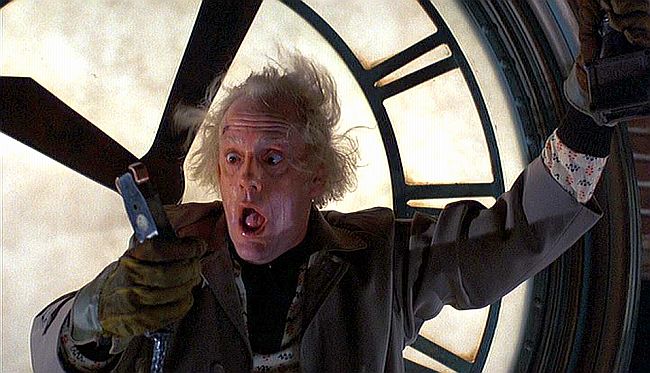 If we can’t know for certain, does that mean we can only guess at what these SEO ranking factors might be and what they each imply for our website development, design and SEO behaviour? Enter the SEO experiments and the mad, but brilliant, individuals who conduct them.

Just as the scientific method entreats, the SEO experimenters out there take general observations and ‘measure what is measurable…making measurable what is not’. These are the individuals who, through assiduity, diligence and no small amount of intelligence, can help us find the object under the cup. They are the ones who can tell us when the bolt of lightening will strike the clock tower!

One such SEO ‘scientist’, although he wouldn’t thank me for saying it, is Rand Fishkin of SEO gurus moz.com. You can read his bio here >>. Rand is the kind of guy to never settle on a hunch. He’s got the patience, the smarts, the ethics and the know-how to test, retest and test again every theory that might yield a better understanding of how this crazy world of SEO works.

From testing the effects of social content on web page ranking, to comparing a blog article’s place in the SERPs with and without any backlinks to it, right the way through to demonstrating the curious behaviour of the even more curiously named, ‘link ghosts’.

Fortunately for us, Rand doesn’t keep his results to himself. He frequently posts about his findings, listens to feedback and continues to test, refine, post and repeat the cycle over and over.

Below is one great example of some of the experiments, findings and opinion, from Rand. It was posted on Slide Share, but we’ve embedded it here for convenience. Take a look. There’s always something interesting to learn from Rand Fishkin’s crazy and brilliant SEO experiments, even if he can’t do much to improve my Thimblerig skills.